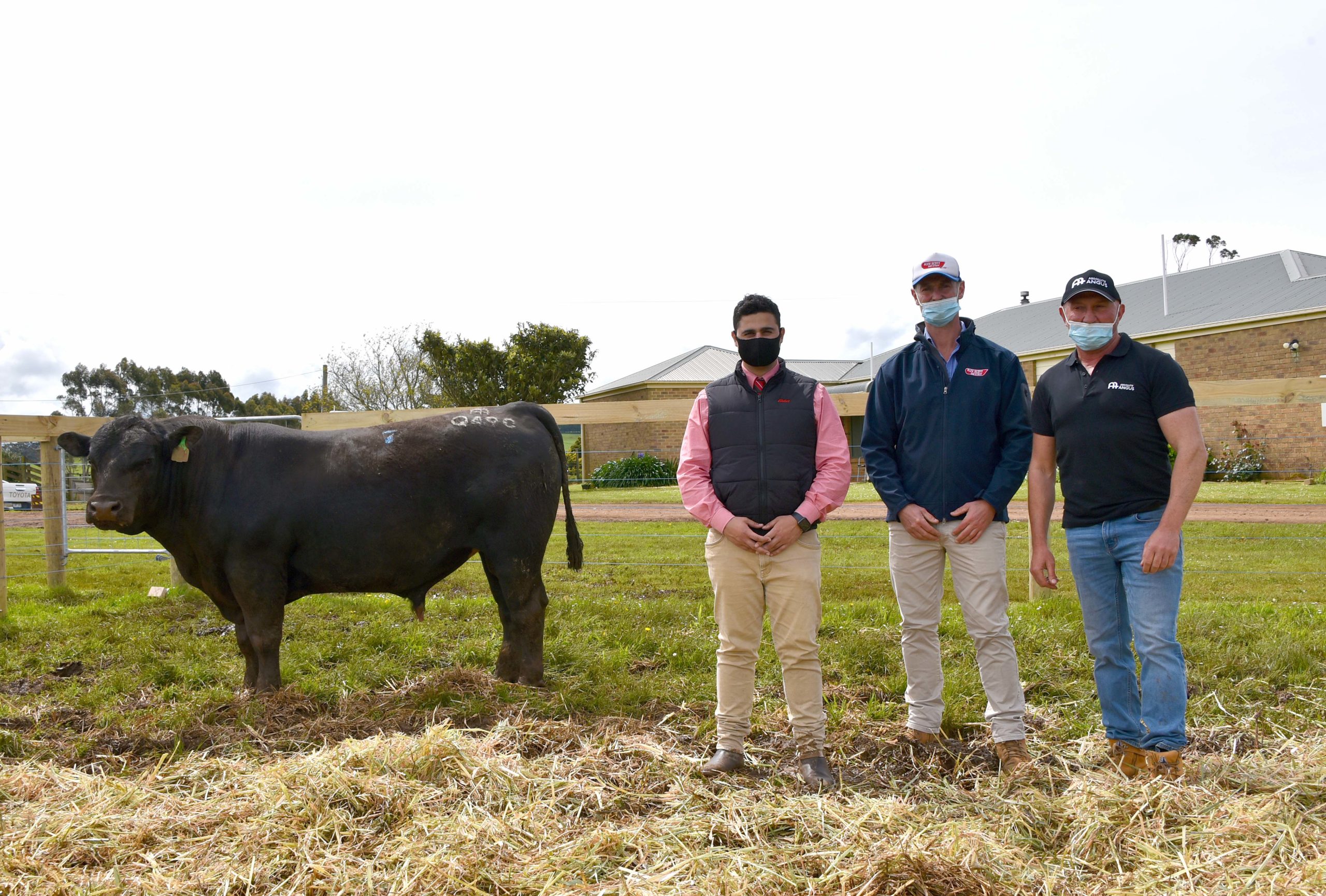 The yearling bulls were in hot demand with 14 selling for an impressive average of $7643 and topping their group at $11,000.

The Trafalgar South-based stud had a big crowd of 70-plus people in attendance, with a number of new faces and repeat buyers bidding competitively on the draft with an additional 63 registered bidders online.

Absolute Angus stud principal Anthony Pisa said he was pleased with the sale result overall, with bulls going all over Gippsland and into Tasmania.

“Overall, the quality of bulls was the best I [have] ever offered and they had the quality data,” Mr Pisa said. “The Command bulls excelled.”

“Buyers were after certain traits and they got what they wanted on the day.

“We’ve been investing heavily in our genetics and those traits are coming through the herds now and it’s showing up in the bulls we sold.

“Both the Q bulls and yearlings stood up in the ring very well.”

He said the yearling draft sold “tremendously well” and the stud would be looking to market yearlings for future sales.

Mr Carew said it was the last stud sale of the season and he was looking for bulls to join to around 100 heifers for his beef operation.

“This bull had good figures and was great quality for the price,” he said.

“We focus on birth weight and 200-day weight and this bull fit that criteria.”

Mr Pisa said Lot 7 was phenotypically and structurally the best bull of the sale with outstanding growth figures in the top 5 per cent of the breed.

“With an eye muscle area of 10.5 [square centimetres], this bull has the ability to really deliver stand-out progeny.”

Picking up the second-highest-priced bull of the day was Ross Rigano, Melaleuca Pastoral, Leongatha, paying $12,000 for Lot 5, Absolute Quality Q375.

Greg Tuckett, Woodside, bought three bulls on day and said he was particularly drawn to Lot 39, Absolute R006, which he bought for $8000.

“I was looking for pure Landfall blood and Lot 39 has that,” Mr Tuckett said.

“The bull will go over a handful of heifers to start.”

“It’s good to see someone new in the industry so passionate about producing a high-quality product and focused on continual improvements.

“Anthony’s genetics are great and he has spent serious amounts of money on some top sires.”

A Gdar Regulator son, Mr Bergamin said he was the pick of the R bulls.

“This bull really stood out for me,” he said.

“I’ve bought bulls from Anthony in the past and today I got the bulls I wanted.”

“[I] thought I would try out a bit of Keystone blood to see how they breed up as they are a different bloodline to what we have got,” he said.

“All the bulls are pretty nice, and all had really good heads, beautiful heads, good phenotype and good feet that stepped through beautifully.

“They will fit well into our program”.

“The bulls presented magnificently and we had a lot of inquiry from the western district, SA and Tasmania,” Mr Setches said.

“Lines of Absolute Angus weaner cattle are now coming through Pakenham and Koonwarra store sales and fat sales and people are quite impressed with his genetics.

“We are getting good feedback on how his cattle are performing both at feedlots and fat markets.”

This article first appeared in the Stock & Land.