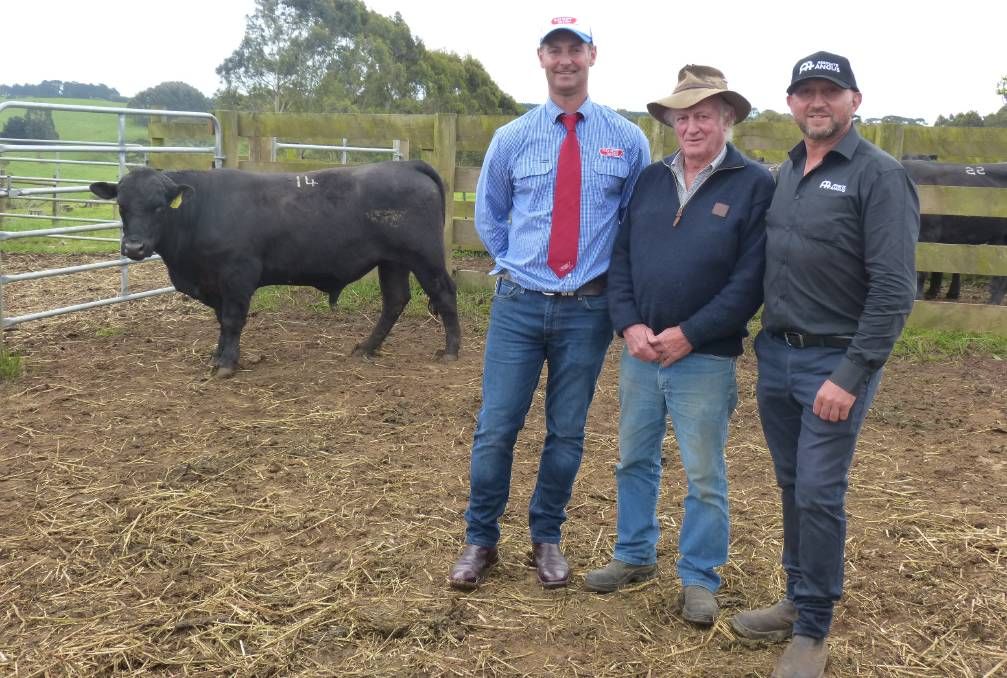 *32 of 38 Angus bulls sold to $8100, av $3460.
Absolute Angus stud principal Anthony Pisa said his inaugural on-farm bull sale “exceeded all expectations” after 32 bulls were sold at auction today.
It was the first sale for the Trafalgar stud which sold 32 of 38 bulls, with four passed in, to record a top price of $8100 and an average of $3460.
The result from today’s sale was bittersweet for Mr Pisa who originally entered Angus breeding more than a decade ago.
“We had the shed for the sale finished only this week, the yards were finished last night and I had mum pass away in the meantime so we were delayed a few things and at one stage I just wanted to give up,” he said.
“But in the last four weeks things have really picked up … and everything in the end worked out fine.”
More than 60 people attended the sale in the stud’s new exhibit shed which featured a bull ring and viewing area for prospective buyers.
The top price bull, lot 14 Absolute Complement N335, sold for $8100 to Geoff Murray, Nar Nar Goon, who was also the volume buyer at the sale, taking home a further two Angus bulls.
“Our top bull has lots of depth and fitness, his mother has great milking ability and he’s just a good all around bull,” Mr Pisa said.
“He has low birth weight and also his growth is really good, at 600 days he was 116 and he has a great milking ability which is a wonderful trait to have in a bull.
“He is also a very quiet bull, he has fantastic temperament.”
Mr Murray, who runs a commercial operation at Nar Nar Goon, said he would join the bull to his Angus cows in the next two to three weeks.
“I just liked the look of him, he was straight out of the paddock so we’ve seen him at his worst and that’s the way to buy them,” he said.
“His figures backed all of that up, he comes from a good background and I don’t think you can fault him but only time will tell.”
Mr Murray complemented the setup of the sale and yards, and the fact buyers were able to view cattle straight out of the paddock.
“Most bull sales they’re fed up for the last three months and this this was straight out of the paddock which was good to see,” he said.
More than 25 people registered for the sale.
Alex Scott & Staff Pakenham livestock manager and auctioneer David Setches said he was pleased with the clearance rate of the sale.
“Genetically the results speak for themselves, Anthony has the right genetics and that reflected in today’s success and certainly exceeded my expectations,” he said.
“You can see that the bulls should have had some more condition on them … but if these bulls had another 50 or 60 kilos in them they’d be totally different and I think in terms of genetics, people see past what’s standing in the yards.
“Next year there will be a lot more time and preparation and we’ll start a bit earlier but we were very pleased with the bulls and the standard of this facility.”
Half a dozen bulls were purchased through AuctionsPlus while Alex Scott & Staff associates purchased more than 10 bulls at the sale.
Mr Pisa said the stud would like host a female sale next year and work on refining its genetics before the 2020 bull sale.